Wednesdays’ evening is taken in Hargeisa!

Wednesdays’ evening is taken in Hargeisa! It is a day reserved for Academic Dialog In Hargeisa (ADIH) event at Hargeisa Cultural Center. The event aims to assist in the production of knowledge in the field of Somali studies, also to act as a network for student and scholars during fieldwork in Hargeisa. Similarly, ADIH aims to help scholars gain a better, more nuanced understanding of Somaliland as a subject of study whilst exposing students to a wealth of locally produced knowledge. The idea of the “PhD Days at HCC” on Somali related issues is also to prepare people for the 40th anniversary of the Somali Studies International Congress which, is due to take place in Hargeisa in July 2018.  So far, we have had 16 PhD level presentations in wide range of areas ranging from politics, economics, linguistics to natural resource utilization by scholars and PhD students who came from universities in different corners of the world.

The event has a special arrangement of presentation where by discussion rather than a hot spot questioning is used on a moon light open space with in the Hargeisa Cultural Center that has an inspiring environment. Participants take ownership in receiving information, sharing their thoughts in a constructive suggestive manner and assist each other in gaining new perspectives that helps at the end to come to common ground with each presentation issues. Only one rule applies here “introduce yourself before you provide your comments “which is aimed at connecting and advancing the bond of knowing each other for more relaxed communication.

Our last three presentations also evolved with similar tone but even got a wider reception owing it to the fact that they were part of the historic, successful and democratic election Somaliland had. All the three presenters were part of the International Election Observation mission as a Sort term observer. First, we had Dr. Scott Pegg Professor and Chair of the Department of Political Science at Indiana University Purdue University Indianapolis (IUPUI). His presentation on ‘Twenty Years of De Facto State Studies: Progress, Problems and Prospects’ surfaced issues centering on the struggle for self-determination with in the past 20 years research including Somaliland whereby he stated that the challenge remains constant starting from naming such entities, irregularities in international principles and limitation on new perspective of academic dialog on the area. He further asserted that fundamentally there remains a continued failure to reach agreement on the number of these entities that exist or have existed since 1945. The nuanced and empirically rich academic literature has also largely failed to advance journalists or policymakers’ understanding of de facto states. Yet, the prospects for de facto state studies remain bright. More diverse comparative work, renewed attention to how engagement without recognition might facilitate the participation of unrecognized entities in international politics, a renewed focus on parent state strategies, and increased attention to de facto states and conflict resolution are areas deserving of greater scholarly attention was the pillar point he wanted to pass. Recent developments from Catalonia to Somaliland were discussed with in this presentation framework which lead to heated, informative and interesting dialog night.

With the well ignited appetite by Dr. Pegg’s presentation, we had our following Wednesday dialog with the young scholar Mr.Yusuf Serunkuma who is a PhD student at Makerere University Institute of Social Research (MISR), Makerere University in Kampala. His work focuses on exploiting the craft and aesthetics of popular culture (poetry, nationalist music, monuments, popular narratives and practices, national celebrations, fliers and symbols of statehood such as the national flag, and recent ethnography, 2015) mostly through ethnography, discourse and literary analysis, Yusuf’s work examines the ways in which Somaliland political identity and national consciousness is mobilized as an independent nation state seceding from Somalia. Using the case study of Somaliland, as a form of de-imagined nationalism, Yusuf then attempts to theorize secessionist nationalism (Eritrea, South Sudan, Pakistan, Biafra, Catalonia, Scotland etc.) as it is distinctly different from other forms of nationalism especially anticolonial nationalism. Participants were impressed with the diverging perspective he was trying to illustrate how identity depiction matters by negating the traditional ‘I am this because I am not that’ which he said unless aspiring nations start centering their self-determination in a way that starts and ends in what they are, he said will still be in a continuous challenge of waiting. In his explanation he stated that in Somaliland’s nationalist project he has two arguments: Firstly, he presents that through its “officially sponsored” popular cultural items (such as the symbols of statehood, monuments, nationalist music and poetry, select events such as the arrest of the Horn Stars returning from Mogadishu in 2015 etc.), Somaliland has constructed a public identity that thrives on an intimate juxtaposition/foil with Somalia. He argues that is perilous as there is potential for nationalist amnesia/violence once the foil disappears. Secondly, that although most of scholarship rightly celebrates the peace and stability in the country of the last 26 years, sustaining the images and histories of violence in its public identity and institutional symbolisms suggests it has remained a country at war.  He asserted that Somaliland ought to build a national consciousness without Somalia as its referent. “my suggestions include monumentalizing cultural and SNM heroes, first presidents, significant historical figures etc.”  Secondly, by defining itself in essentially internationalist terms (democrats, anti-terrorism, victims of a genocide), Somaliland surrenders both the power to define itself in its own terms (say, cultural-traditional) to the international regime of power, which defines those terms.  As well, this has potential to plunge the country into cultural/nationalist amnesia once the terms of the debate shift. On the bases of this presentation participants provided pro and critics by giving example of struggle all over the world which lighted up the discussion. Among the core comments were the international principle of state recognition being binding to have a referent state be it as a mother state or patron which are central in the self-determination process. well his argument popular culture shall be used to identify what Somaliland is as it stands on its own description was concluded with a performance by HCC Cultural Dance team that played ‘Hobbay’.

As the forum is centering Somaliland/Somalia based research with internationally acknowledged methodology and research practice, the three presentations we had resonated on Somaliland statehood and mechanisms for development that coincided with the election the state was on. The third presentation was by Miss Amanda Møller Rasmussen who has a background in Social Anthropology of Development (MA) from the School of Oriental and African Studies as well as in African Studies (MA) from the University of Copenhagen. She has been affiliated to the Centre of African Studies at Copenhagen University as a research assistant and project coordinator. Her research has mainly focused on Somaliland’s fishery sector and its development initiatives, exploring the various economic, social and epistemic networks that surround Somaliland’s fishery development on both a local and global level. During her presentation she stated that although fisheries in Somaliland have seldom caught the attention of scholars or international actors, the successful articulation of a linkage between “Somali piracy” and regional fisheries have led to more and more development attention, resources and technologies targeted at the Somaliland fishery industry. She argues that this has resulted in linking both local and global actors in an effort to securitize the region. Her presentation reflected more upon how these narratives are used to address issues of poverty and fishery development. At the same time, she investigates how these narratives have made the Somaliland fishery industry – a marginal and often unnoticed industry with little influence on the global community – into an arena from where different local and global actors are able to negotiate their interest, positions, and the allocation of development resources in a globalized world. In such a process establishing, appropriating, and re-establishing ideas about potential dangerous fishermen and the legitimacy of international development by linking up to local desires, global agendas, and the development epistemic communities that surrounds fishery development in Somaliland is mandatory was her point to take from the presentation. As always her presentation was also followed by supplementing perspectives and challenges that shadowed fishery which is an industry Somaliland has a wider opportunity for national development.

Well this is ADIH November with Wednesdays’ well spent, academic environment celebrated and the waiting for the next PhD presentation taking over as the last Wednesdays of each month are dedicated to a documentary featuring night that brings the public together to give the dialog another emerging dimension of academic discussion with socially significant documentaries. This week we are screening ‘Cultures of Resistance’ directed by Iara Lee to lead the way for another intellectual dialog and say goodbye to November a month that once again placed Somaliland back on top of democratic practice success story in Horn of Africa a region dominated by fear after election season. 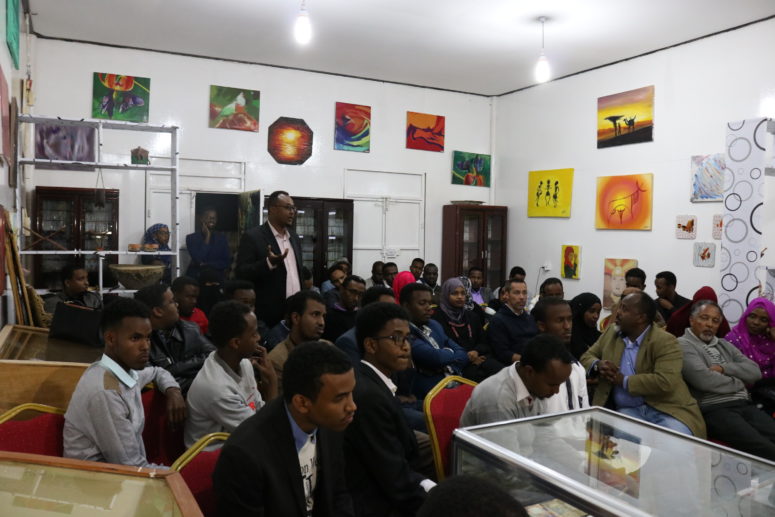